Until 2020, Open Banking has grown at a consistent rate globally. However, the global pandemic, innovation in the payments industry, increased trust in Open Banking technology, and new regulatory initiatives have all contributed to a significant acceleration in the speed of adoption worldwide. According to a 2021 study by Juniper Research, the value of global payment transactions facilitated by Open Banking will exceed $116 billion by 2026. This projected value represents a 2,800% growth rate in the next 5 years—2021 is projected to generate $4 billion.

What is Open Banking?

For more information on all things Open Banking and to better understand the state of Open Banking around the world, check out our eBook: Open Banking: Who, What, When, Where, and Why.

Governmental Support for Open Banking in the US

A huge part of the anticipated growth for the next couple of years can be attributed to support from the United States government. The American government supports the healthy competition that is being created in the current Open Banking movement and wants to take a more active role in fostering this. However, the complex nature of the US financial landscape has slowed Open Banking’s growth in comparison to Europe and other regions.

Still, earlier this year President Biden issued an Executive Order aimed at tackling monopolization across various industries. An important section on Banking and Consumer Finance includes language to increase the difficulty of bank mergers and allow customers to regain control of their financial data from banks. This represents a small but pivotal step to encourage the growth of Open Banking, which ultimately puts the consumer in control of their financial data.

Open Banking Payments: A Real Threat to the Dominance of Cards

Juniper Research claims “payment initiation is the most prolific use case where the banks are losing business to TPPs, and most innovations take place.” The ability to use Open Banking to make payments directly from a bank account has become a growing threat to the dominance of cards, particularly within eCommerce. Despite the popularity and familiarity of cards, Open Banking may represent a more secure alternative–”leveraging permissioned access to bank accounts can reduce fraud risks due to strict KYC (Know Your Customer) rules.” 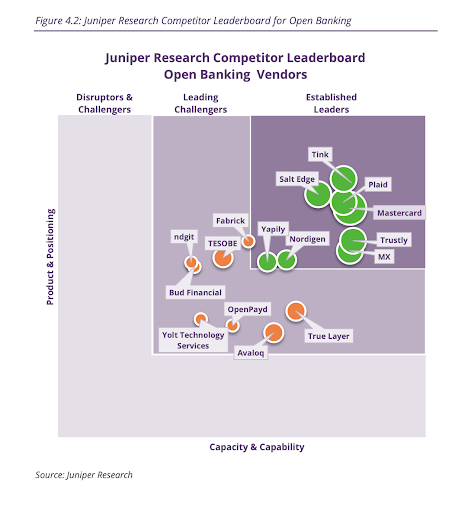 Since 2008, Trustly has remained committed to the global expansion and adoption of Open Banking. Now more than ever, Trustly remains committed to the opportunity Open Banking affords merchants and consumers. Trustly has been a driving force for Open Banking in Europe and is continuing the momentum in the United States and Canada. Our enterprise grade bank connectivity expands to  more than 6,300 financial institutions across North America, Europe, Australia, and Canada and counting.  Learn more about our Online Banking Payments and Online Banking Data or contact us today.