The Evolution of the Bank Account - Part II: A New Hope

While World War II was undoubtedly one of the darkest periods in human history, it may also have saved the banking industry.

Following the US stock market crash in 1929, people lost their faith in banks. Despite government efforts to improve public confidence, people increasingly preferred hiding their cash to depositing it in a bank account. And who could blame them, when bank failures were an almost everyday occurrence?

But World War II was just the shot in the arm banks needed to get back on track. What’s more, the technological innovations of the post-war years reshaped the bank account and redefined the relationship between banks and their customers.

As the deadliest, most widespread war in history, World War II was also very expensive. Both Allied and Axis powers threw their entire economic machinery behind the war effort, creating many large, credit-hungry organizations in the process.

Banks were in the thick of this action, purchasing government obligations and providing loans to the organizations involved in funding, administering and conducting the war. Many smaller banks joined forces to better meet the demands of these large clients, gaining global reach in the process.

If banks were in dire straits before WWII, the landscape was very different when the war ended in 1945. Thanks to the staggering amount of business they had done during the war, banks in Allied countries had more than doubled their assets.

The early post-war years: toasters, clock radios and the age of freebies

The end of WWII and the economic boom that followed paved the way for what is to this day one of the bank account’s most popular features: rewards. 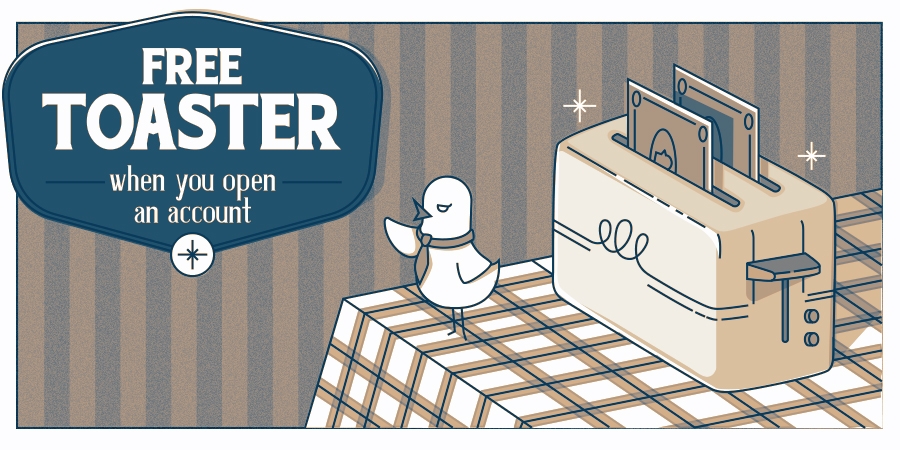 People who had been solely preoccupied with survival suddenly had stability, good jobs and more money in their pockets. At the same time, post-war reconstruction efforts, industry and international trade created more demand for credit.

Banks started loaning out money at increasingly higher profit margins. But as demand for credit kept growing, so did the need for a larger pool of assets. So, in an effort to persuade more people to deposit their money, banks started giving out toasters, clock radios and other prizes to new customers. Today, the tradition lives on in accounts that offer free airline miles, loyalty points, cashback on bills and other rewards.

While freebies and perks went a long way toward increasing its appeal, the bank account still wasn’t exactly convenient. People had to visit their local branch during opening hours to access their money, which often entailed getting time off work and braving long queues. This all changed with the introduction of the ATM in the 1960s.

There is no single reason or event that led to the ATM’s creation. What’s for sure, though, is that the ATM didn’t just make banking more convenient, it also caused a sea of change in the relationship between banks and their customers.

With the advent of ATMs, access to money was no longer tied to a bank’s opening hours. Banking also became location-independent. Whereas previously you had to visit your local branch, now you could access your money from anywhere your bank’s ATMs were located. As a result, customers’ loyalty shifted from the individual branch to the larger bank brand.

Magstripes and the birth of plastic money

Alongside ATMs, the 1960s also saw the birth of another game-changing innovation: the magstripe.

The magstripe came about for reasons unrelated to banking. The story goes that IBM engineer Forrest Parry was trying to attach a magnetic stripe to CIA identity cards for data storage, but he was having trouble smoothing out its wrinkles. One night, he mentioned his struggle to his wife, who happened to be doing some ironing. Having asked to look at the prototype, she used the iron on the magnetic stripe and solved the problem.

It wasn’t long before banks realized the magstripe’s potential. Prior to its introduction, debit cards didn’t exist. Credit cards existed, but were quite rudimentary. Paying with them involved tedious manual labor, which made the process slow and prone to errors.

The magstripe revolutionized the process by making it possible to simply swipe your card and sign your name. As point-of-sale devices and computers became more sophisticated, debit and credit cards quickly started supplanting checks as the preferred method of cashless payment.

While ATMs and bank cards made accessing cash and paying for goods and services easier than ever, transferring money internationally was a complicated and risky affair.

If you wanted to send money abroad, you had to go to your local branch during opening hours. The bank would then send instructions to the overseas bank via TELEX, a system which delivered text-based messages over the telegraph network.

TELEX was painfully slow and unreliable. Wires could get crossed or communication could fail altogether due to something as simple as bad weather. It was also quite difficult to track a payment’s progress and make sure it reached its intended recipient. Your transfer could get lost or end up in someone else’s hands, and you’d have no way of tracing and rectifying the issue.

This all changed in 1973, when 239 banks from 15 countries founded SWIFT: the Society For Worldwide Interbank Financial Telecommunication.

SWIFT was revolutionary because it delivered instructions via a computerized system using a unique combination of numbers and letters (SWIFT codes). The system was much easier to operate, safer and, consequently, cheaper than TELEX. It also left a verifiable trail that could be quickly checked for mistakes and potentially fraudulent or otherwise illegitimate transactions. But this was just a taste of what was to come.

Once the innovation that made SWIFT possible — the computer — hit the mass market and became a mainstay of our daily lives, it brought about further elemental changes to our relationship with the bank account and even to the nature of the bank account itself.

How did the rise of the internet and subsequent birth of online banking change the way we use our bank accounts? Read more in part three of the Evolution of the Bank Account series.